Two positions from which defensive techniques should be executed

DEFENSIVE POSTURES – POSITIONS FROM WHICH DEFENSIVE TECHNIQUES SHOULD BE EXECUTED.

“Look in the mirror and you will see the one person responsible for your safety.

Even if you have a partner, or team, to watch your back, you are still responsible for your front.”

One of the most common methods for maintaining personal safety while on duty is using the Interview Stance when dealing with the public.

If you have something in your hands, such as a notebook, raise it up to use it, do not look down.

This is why it is suggested to keep a small digital recorder for conducting interviews instead of taking notes. 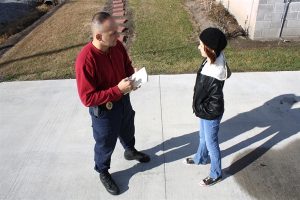 Upon recognizing that a physical confrontation is imminent, officers should immediately move into their Fighting Stance and prepare to defend themselves.

The Fighting Stance is wider and more balanced than the Ready Stance, and it provides optimum mobility.

Roll the shoulders slightly forward, while keeping the muscles in the arms and shoulders relaxed.

Officers should be aware that tense muscles hamper speed and accelerate fatigue.

Login
Accessing this course requires a login. Please enter your credentials below!
Lost Your Password?